Binary Translator will help you to convert Binary to Text online. Also, it’s free and very easy to convert. 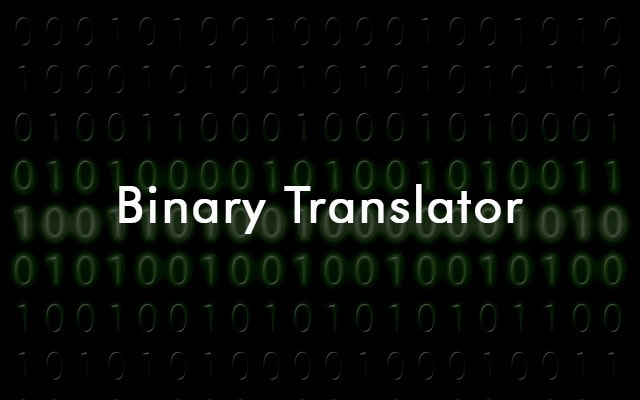 Computers are using binary languages for communication. They don’t understand our normal signs or languages. Until we convey them in binary that is 1 or 0. Also, for your information, these two numbers are ruling the whole digital world.

Every process inside a computer takes place in the form of binary. Number one stands for True or ON and number zero stands for False or OFF. The exchange of binary digits takes place between different components.

The binary codes are not human readable. So, we need to decode it to read. You can use a binary translator and decode any binary scripts online. Therefore, it is the best way to convert Binary to Text.

Many years back programming was done in machine language. In which binary codes were used to program and it was very difficult to run and manage. Also, it was not efficient to make next-level applications.

So, there are two ways to convert High-Level Programming Language into Machine code. They are as follows:

Understanding Binary numbers are difficult. So, the question arises:

Why are they still the primary choice for computer manufacturers?

Why they are not using other easy number systems?

These are the answers and reasons that make computers to use binary:

How to Convert Binary to Text?

Binary codes can’t be read by humans. Therefore, you have to convert them into text. Binary Translator is using for the conversion process.

This online binary converter is easy as well as free to use. The user interface is very simple. So that anyone can use it without hurdles. Just you need an active internet connection and a device accessible to the Internet. That’s it.

Then select character encoding. By default, it is ASCII, and that is most preferable. When all things are set, Press the “Convert” button. As a result, you can see the binary to text conversion below. After that, you can copy the output.

Why Use Binary Translator?

Above all points defines the advantages of binary to text converter. In conclusion, this converter will surely reduce your conversion process.